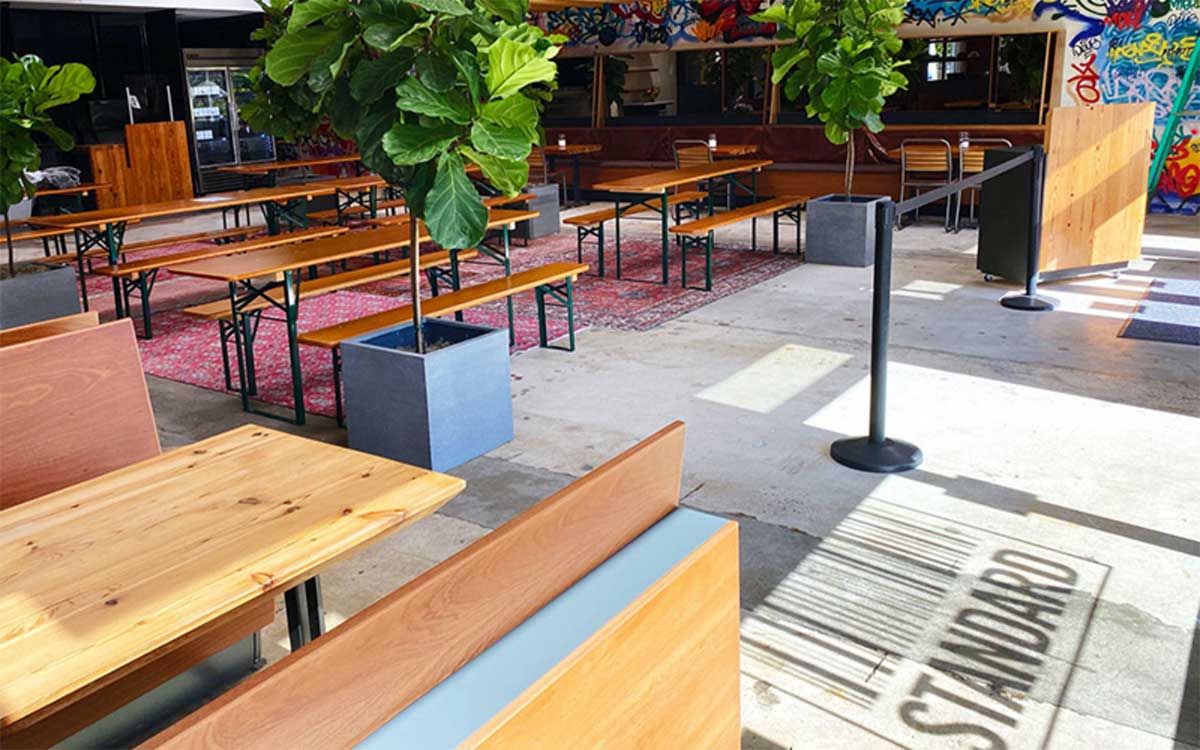 “Aaron helped me work through the concept and draft menus when I didn’t have a chef, so I could have something to present to candidates and show them what direction we were going in”

Like many businesses that opened in the last year, Standard Beer and Food has had to evolve its concept along with the shifting restaurant landscape.

The beer part of the equation represents the latest endeavor from Whit Baker and Andy Schnitzer, who are also the team behind Bond Brothers Beer Co. in Cary and the beer pop-up Ancillary Fermentation. As such, Standard Beer and Food started as a brewpub, though the food side, overseen by operating partner Cov DeRamus, underwent a series of transformations before morphing into its current iteration as a casual neighborhood eatery well-suited to the Person Street neighborhood in Raleigh, North Carolina.

Initially, Standard Beer and Food’s menu borrowed liberally from different crowd-pleasing categories such as wings and tacos, and while it had broad appeal, it didn’t have any distinctive features, ingredients, or techniques to call out. To help focus the concept, DeRamus hired Aaron Deal, founder of Deal & Associates Restaurant Consulting (DARC) in Roanoke, Virginia.

“It was about taking the ubiquitous, approachable American palate and turning it into something with conceptual focus,” Deal says.

To begin, DARC conducted concept research to see what existing casual, food- and beer-driven places were doing on a national level, like Kenji Lopez’s Wursthall, and polling colleagues in the region, too. Since beer shares equal billing in the name, the concept’s menu also needed to include dishes that pair well with beer.

DARC conducted ingredient and dish testing to devise four different menu concepts, before the team landed on a menu that included Biergarten-style fare such as sausages and pretzels, as well as wings, sandwiches, and salads.

“Aaron helped me work through the concept and draft menus when I didn’t have a chef, so I could have something to present to candidates and show them what direction we were going in,” DeRamus says.

But if you don’t have a chef who can execute the menu, you don’t have a restaurant. “The labor market is very tight. It was even hard to find a good kitchen manager or chef candidate back then. From there on out, [Aaron] helped me to try to locate someone.”

DARC worked with the Standard team to help hire a chef, which involved finding and vetting candidates and bringing them in to do tastings. Conducting a tasting—where a chef prepares dishes for potential employers to taste and get a sense of their skills and capabilities—is a standard hiring practice for restaurants. In the end, a word-of-mouth connection brought the current chef, Marco Aceves, into the fold.

When Aceves was hired, the world was still in the throes of a global pandemic and shifting mandates made it challenging for restaurants to operate in any kind of consistent, normal fashion. But the Standard team was able to lean into diners’ desire for comfort food and a more casual style of dining.

“We live in a neighborhood where there are not a lot of casual options with quality food and service. We’re looking to fill a niche in the neighborhood,” DeRamus says.

During menu conversations, Aceves, who is originally from Mexico City, kept coming back to tacos. He and the Standard team conducted several taqueria pop-ups to test dishes and get the word out. Today, a roster of top-notch tacos anchors the menu, including al pastor, steak, tempura fish, blackened N.C. shrimp, and a vegetarian oyster mushroom number with chimichurri cashew crema. Sides and salads have a taqueria twist too, like a coal-roasted beet salad with honey roasted pepitas, or an esquites salad in which charred yellow corn is brightened with cilantro and jalapeno and scattered with queso fresco. Wings are on the menu too, featuring Joyce Farms chicken wings that are dry-rubbed and oak-smoked, served with chimichurri ranch and pickled onions.

Though DeRamus labels Standard Beer and Food as a farm-to-table brew pub, he acknowledges that the concept will likely continue to evolve. On the menu front, he anticipates incorporating elevated pub food such as cheeseburgers and house-made all-natural hot dogs to sit alongside the taco line-up. The restaurant’s eclectic feel is underscored by the design too, where German beer hall tables sit atop Oriental rugs, and potted ficus trees stand out against graffitied walls. It’s the kind of place where you can bring your family and kick back with a couple well-crafted IPAs and tacos on the patio one night, or meet up for a casual date night the next, where you might pair a Rose Biere (a beer-wine hybrid) with spicy sea scallop aguachile. It’s anything but standard, and that’s kind of the point.

Looking back over the last 15 months, DeRamus describes opening Standard Beer and Food and finetuning the concept as “feeling like I’m flying into a headwind and pivoting in countless ways.” He credits Deal and his team for their support and ability to provide advice on range of topics, from menus to labor costs to standard operating procedures.

“In the beginning, Aaron was very helpful with creating menus and figuring out what our style of service was going to be given the layout and feel of the space,” DeRamus says. “He was a good sounding board and helped us think all those things through. He understands all the facets of the business and how challenging it is, having done it himself.”

Drop Us A Line

Schedule a free consultation to see how we can help take your brand to the next level.